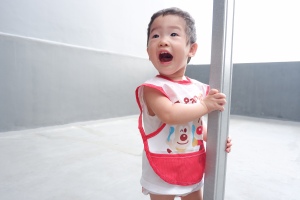 Eegan, my son is almost 14 months of age now. And he’s in the phase of what i called as a “free will” phase, where he already has desires to do things or to go to places where he wants. Usually, when he wants some things or go to some places that he wants, he would then has a little crying session whilst pointing finger to the things or places that he desires – telling us to do as he wanted to be. When everything that he asks for are cool, we will usually let him have it, but sometimes he would ask for things that aren’t allowed yet for him, in this case, we have to say no.

Well, as like other kids, this one is so not good with nos. When he doesn’t get the things that he wanted, he would then burst out crying in desperation and probably anger. But we are that parent who keep insisting the right thing and let him cry a bit about it. Having these moments couple of times, i see that eegan starts to learn to understand that his cries won’t change anything, it turns out everytime we tell him no, his cries become shorter and shorter in time. The three of us learn something here, we as parent learn to teach him about no and how to make him understand about it when he wants something dangerous or isn’t yet allowed – while eegan learns to accept no for his good.

Learning these as a parent reminds me of how i should just obey God’s no, because every parent’s no is for us good. Eventhough it means that i probably won’t get what i have wanted. And as a parent, one thing that i could be assured of is that God will always be happy to give me anything when it is good for me, needed by me and in a good time for me to have it. So, cry, but learn from little eegan who never then hates us his parents and just move on.

Finally, a little secret about every parents is that we tend to sacrifice everything even ourself to give our kids anything they need.

2 thoughts on “ACCEPTING NO IN LIFE”